Posted on January 31, 2011 by bakedcottonstar 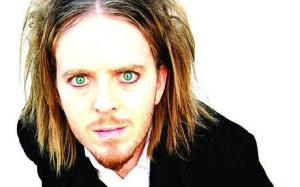 Tim Minchin is incredible! I have a particular fondness for musical comedians and he is right up there! He is Australian but was born in Britain, so he has a unique slant on things with that amusing British sarcasm thrown in for good measure.

His comedy is mainly comprised of quirky songs he sings while playing piano, they are all musically brilliant and made better by the lyrics which are comedy genius. There are interludes of chatty comedy when he further refers to very satirical random topics.

His explanation for combining comedy and music is “I’m a good musician for a comedian and I’m a good comedian for a musician but if I had to do any of them in isolation I dunno.” 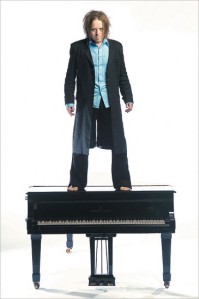 He has a very theatrical eccentric onstage appearance and persona, wearing suits and bare feet, with wild backcombed hair and dark eye makeup. The bare feet and dark eye makeup are definitely things I can relate to – both of which are staples in my everyday life!

One of Minchin’s beat poems, Storm was made into a short animated movie released in 2010. A blog was launched to accompany the film-making process along with a short trailer on 8th January 2010.

Recently Tim Minchin has released a musical version of Roald Dahl’s novel Matilda, which he co-wrote with Dennis Kelly and the Royal Shakespeare Company produced it. It’s ran at the Courtyard Theatre in Stratford-upon-Avon until January 30, 2011. It is due to move to a London theatre and I would absolutely LOVE to see it, it’s one of my favourite Roald Dahl books (although they are all really good) and would make an excellent musical – the involvement of Tim Minchin increases my interest in it, a superb nostalgic experience!

I am going to see Matilda in February and am very excited!