Posted on April 4, 2011 by bakedcottonstar

Gary Baseman is a contemporary artist who works as an illustrator, fine artist, toy designer and animator. He is the creator and producer of Disney’s animated television show “Teacher’s Pet“. He is also the artist designer / illustrator of the board game; Cranium.

His style mixes pop art / vintage / mythological images to create animation that is for me, very reminiscent of early Disney animation and Ren and Stimpy

Gary Baseman gave a guided tour and showed his work as part of an exhibition titled “Art From The New World”, which we visited at Bristol Museum in May 2010. 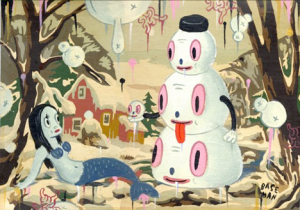